n March 24th, 1603, Queen Elizabeth died having ended her forty-four-year reign known as the Golden Era being succeeded by James VI of Scotland. King James, though born of Roman Catholic parents, publicly pledged himself against the extremes of both Romanism and Genevanism, again, like Elizabeth, trying to bring uniformity to the church. He had a distaste for the Reformers of Geneva, thus disliking the Geneva Bible, and with the unpopularity of the Bishop’s Bible, King James sought for a new translation of the Bible. The king declared, “That a translation be made of the whole Bible, as consistent as it can be with the original Hebrew and the Greek; and this is to be set out and printed, without any marginal notes, and only to be used in all the churches of England in time of divine service.”. The king commissioned several “learned persons of both the universities and other places, to meet, confer, and consult together in order to make a new and more correct translation of the Bible”. In 1604, the king had selected 54 men for the translation of the Bible, but for reasons unknown, only 47 engaged in the work all of whom were known for their piety and learning. The following rules were established as guidelines or their translation as given by Burnet in his History of the Reformation:
​​​I.The ordinary Bible read in the Church, commonly called the Bishops Bible, to be followed, and as little altered, as the Truth of the Original will permit.
II.The Names of the Prophets, and the Holy Writers, with the other Names of the Text, to be retained, as nigh as may be, accordingly as they were vulgarly used.
III.The old Ecclesiastical Words to be kept, vil. the word Church not to be translated Congregation, &c.
IV.When a Word hath divers significations, that to be kept which hath been most commonly used by the most of the Ancient Fathers, being agreeable to the Propriety of the Place, and the Analogy of the Faith.
V.The division of the Chapters to be altered, either not at all, or as little as may be, if necessity so require.
VI.No Marginal Notes at all to be affixed, but only for the explanation of the Hebrew or Greek words, which cannot, without some circumlocution, so briefly and fitly be exprest in the Text. IX.As any one Company hath dispatched any one Book in this manner, they shall send it to the rest, to be considered of seriously and judiciously, for his Majesty is very careful in this Point.
X.If any Company, upon the review of the Book so sent, doubt or differ upon any Place, to send them word thereof; note the Place, and withal send the Reasons; to which if they consent not, the difference to be compounded at the General Meeting, which is to be of the chief Persons of each Company at the end of the Work.
XI.When any Place of special obscurity is doubted of, Letters to be directed, by Authority, to send to any Learned Man in the Land, for his judgment of such a Place.
​It is said that the process took at total of 5 years, 3 years by the translators and 2 years through the presses, and in the year 1611, from the press of Robert Barker, the new translation was complete. Now known as the King James Bible, the original title read as follows:
The Holy Bible
Conteyning the Old Testament, and the New.

Newly Translated out of the Originall Tongues : & with the former Translations diligently compared and reuised by his Majesty's Speciall Commandement

Appointed to be read in Churches.
Imprinted at London by Robert Barker,
Printer to the King's Most Excellent Majesty,

Anno Dom. 1611.
The translators used the Greek “Textus Receptus” of Erasmus and Stephanus, along with the English translations of William Tyndale and the Geneva Bible. It is said that the process spanned a total of 5 years; 3 years by the translators and 2 years through the presses, and in the year 1611, from the press of Robert Barker, the new translation was complete.
This first edition was a large folio, 11” wide x 16-1/2” tall. There were five separate issues of the 1611 printing in total; 1611, 1613, 1617, 1634, and 1640/39.
When King James authorized this large pulpit folio to be printed, Robert Barker did so by facilitating 5 separate printing presses working tirelessly for two years. By 1611, the pages of several thousand copies were printed and ready to be bound and issued to the churches of England. It is estimated that in 1611 roughly 300 Authorized Bibles were issued to the churches. The remainder of the printed pages were stored away until the next issue was decreed by the king of England. Over the next two years, this Bible was read in the churches and small errors began to be discovered. The most famous of these misprints is Ruth 3:15. In 1611, this verse was printed as “he” went into the city, when the correct translation should read “she” went into the city. Thus, naming the first edition-first issue of the King James Bible in 1611 as the Great “He” Bible. As these misprints were discovered, these specific leaves, and only these leaves, were re-printed, and then bound with the other leaves originally printed in 1611. These were then issued at the next decree of the king. The next issue was in 1613. At this point, several of the known misprints were corrected along with Ruth 3:15 being changed to “she”, thus the second issue was named the Great “She” Bible in 1613. Over the course of the next 29 years, there were five pulpit folios issued to the churches with the majority of the leaves being printed originally in 1611, and with each issue, small errors were fixed, and these pages were reprinted. In the 4th and 5th issues, 1634 and 1640, the text layout stayed exactly the same but with a larger number of small changes made to the marginal notes which suggests a larger reprinting done in the latter years. Finally, in 1640, the 5th and last issue was released concluding the legacy of the 1611 printed folios. These misprints, corrections, and small changes will clearly define the different issue dates of the 1611 King James Bible.
The King James Bible has become the standard of the Reformed Christian. It is the best and most reliable English translation of God’s Word because of its use of the Textus Receptus instead of the gnostic Alexandrian Greek texts. The King James Bible illustrates the Greek Textus Receptus preserved through the Byzantine Greek texts of the New Testament and the Masoretic Hebrew text of the Old Testament, most accurately capturing the whole council of God in the written Word
However, we cannot fall into the trap that ensnared so many Catholics after the translation of the Latin Vulgate by Jerome. When Jerome translated the Bible, he did so from the original languages, but the Catholics contrived the Latin Vulgate into something more precious than the original, claiming the Latin to be the divine language of God. Let us be careful not to make the King James Bible the divine language. Although it is a wonderful and complete translation, it does not replace the original languages. Thus, in studying the Bible, let the One True Author speak to you through the translation, and allow the whole council of God lead you to the Truth.
1611 King James Bible 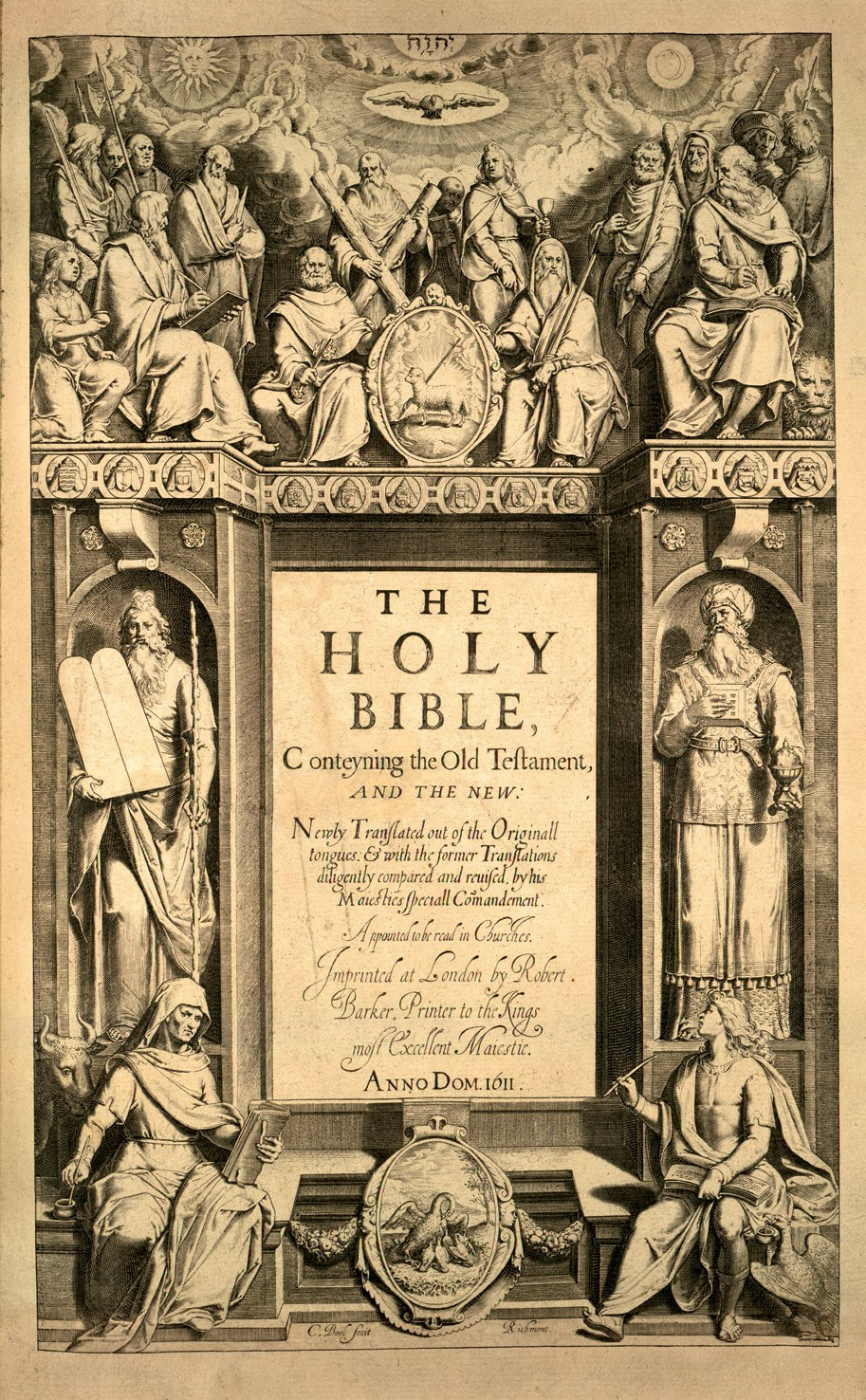 The 1611 first edition was a large folio, about 10-1/2” wide x 16” tall. The artist of the title page was Cornelis Boel, who engraved princess Elizabeth and prince Henry below Moses and Aaron respectively, with the tetragrammaton at the top of the page and the Lamb of God at the top center above the title. 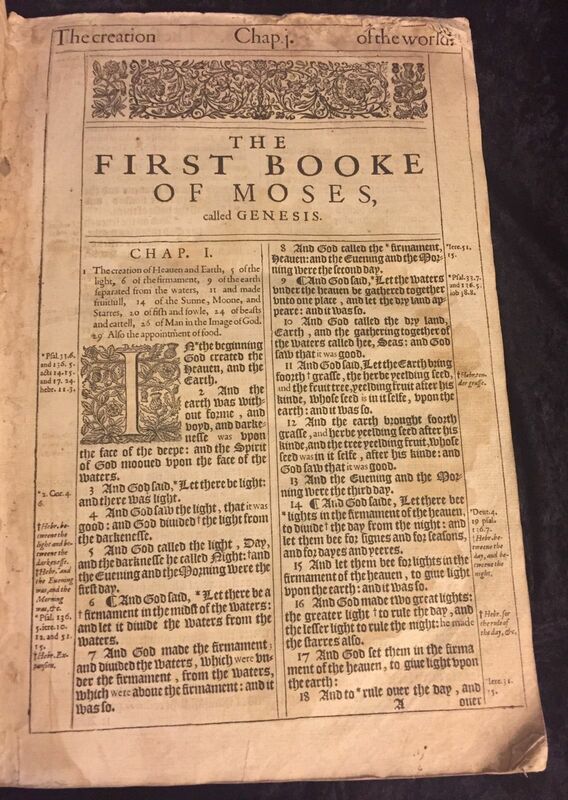 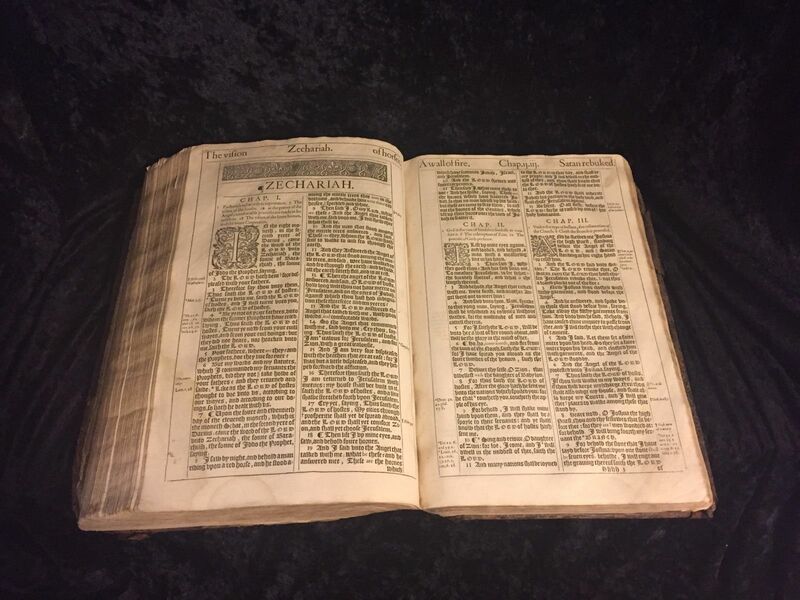 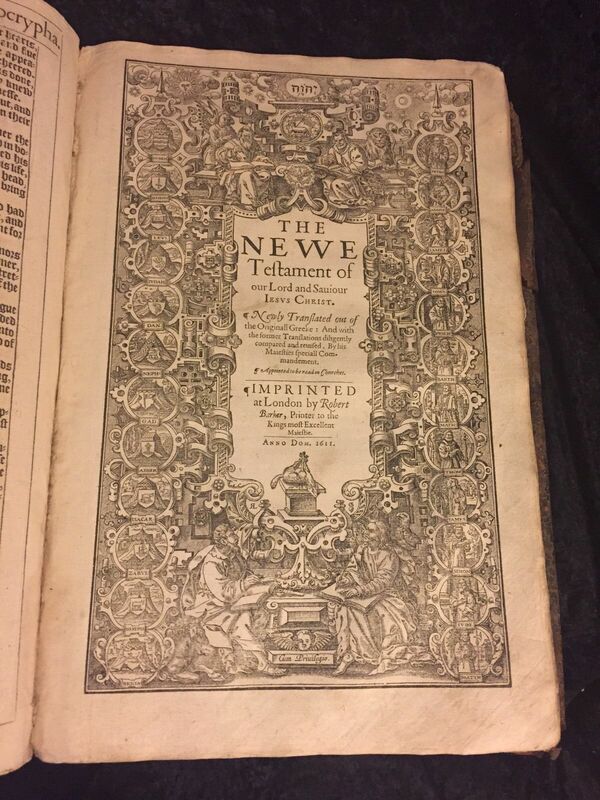 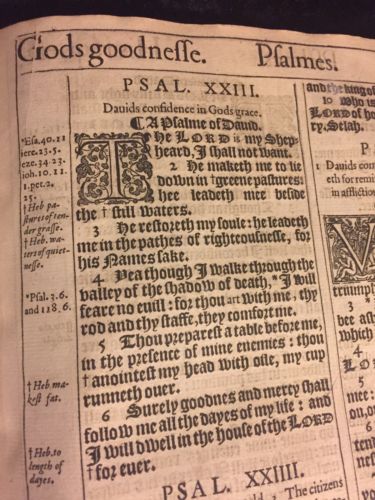 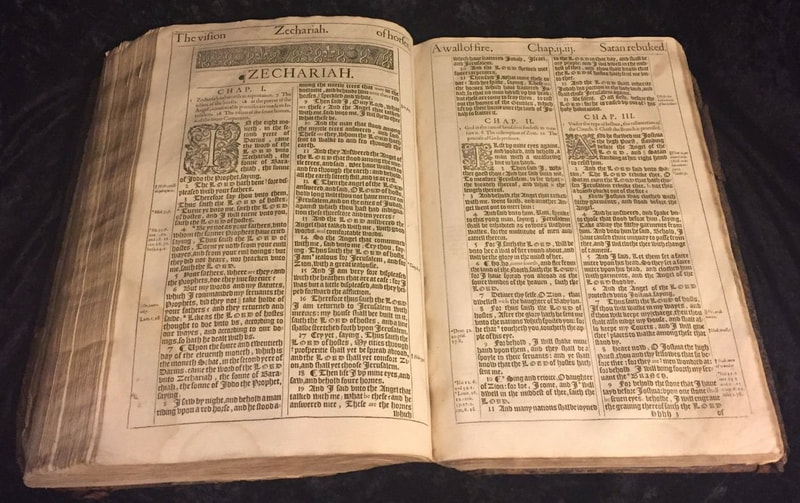 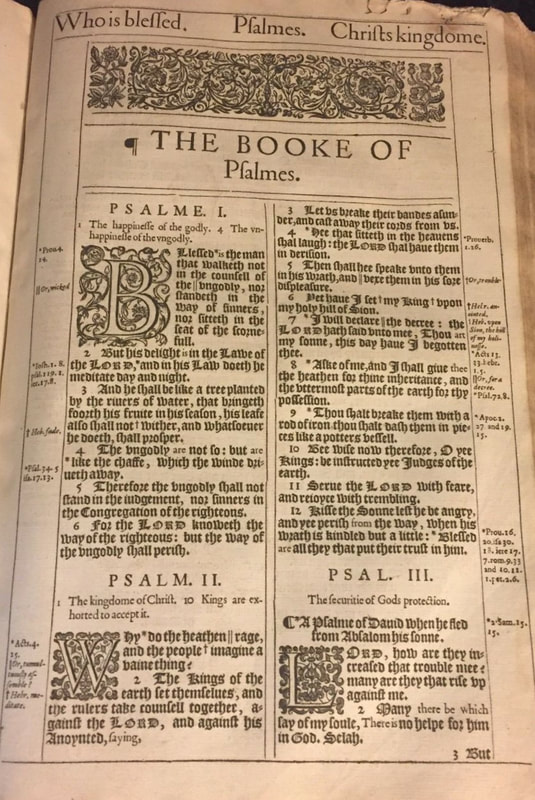 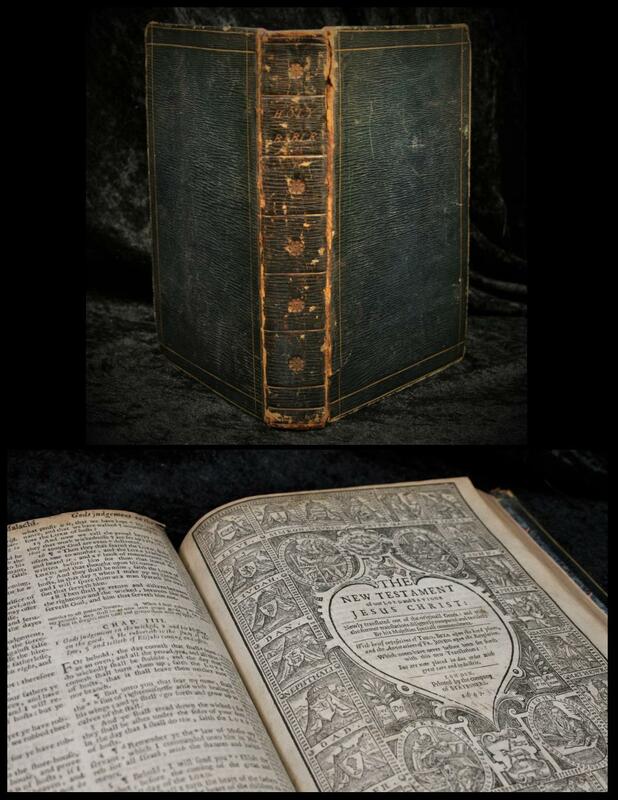 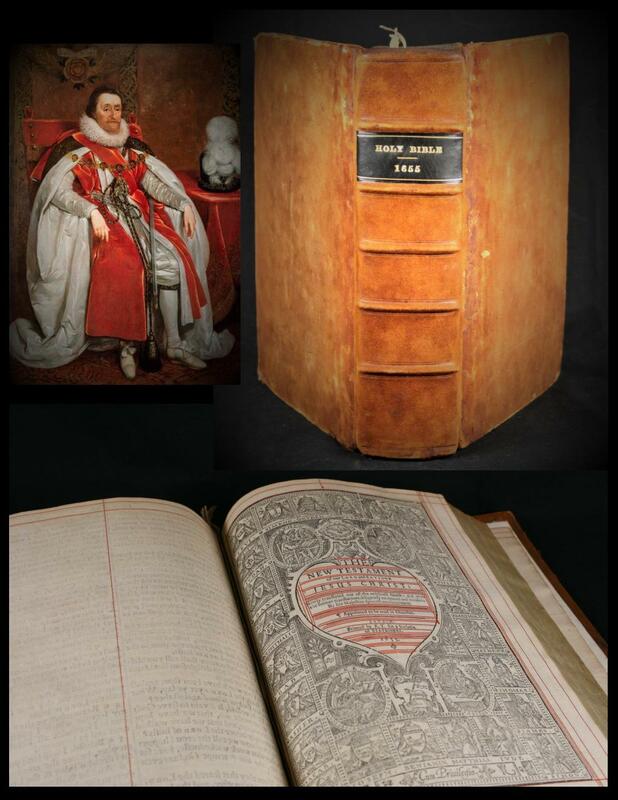 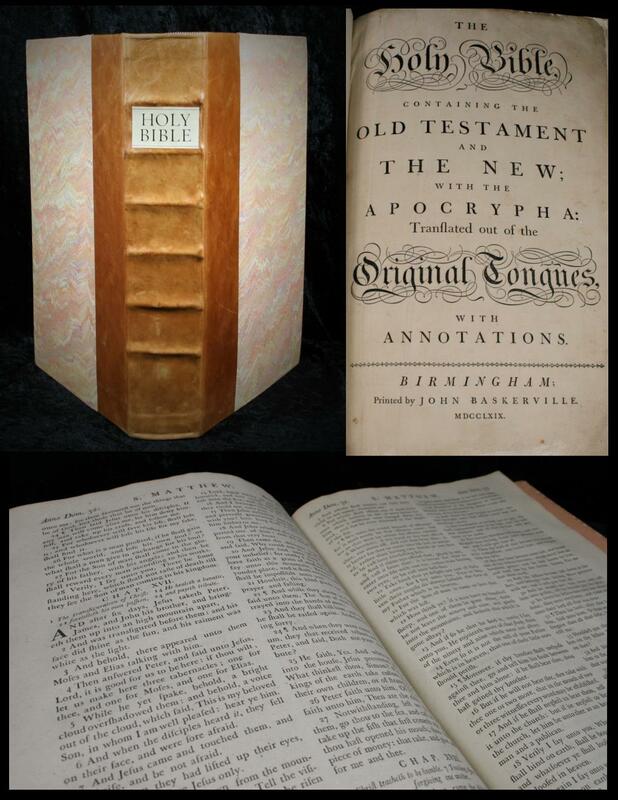