​ohann Gutenberg has been recognized as the printer of the first Bible, in fact, he was the printer of the first published book. It was God’s hand continuing to move on the world to bring His Word back to the world. As discussed previously, the Bible, in general, was hidden from mankind for over 1,000 years, but now, God has moved upon men to unite His Word to the people. 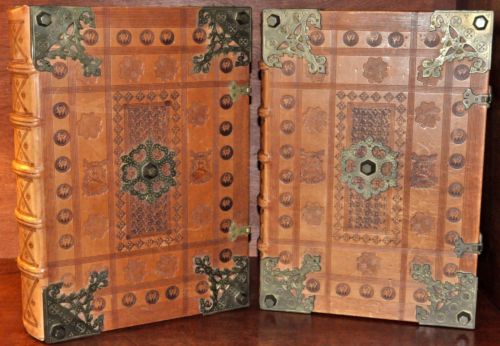 1455 Gutenberg Bible 2 Volume Folio
Johann Gutenberg was born at the turn of the fifteenth century in Mainz, Germany. He was trained as a gem polisher and a goldsmith, but in the mid-1430’s, he began some experiments with “artificial writing”. Gutenberg spent his inheritance and came into debt working on his invention. No patent laws existed to protect inventors, so his work had to be done in secret.
Johann was so far in debt that creditors threatened lawsuits to collect their loans. In order to recoup some of his expenses, he printed a series of Latin grammar books, calendars, and a German translation of a papal bull, but this still wasn’t enough to bring him out of debt​.
Gutenberg’s desire was to print the Bible, but he had no funds to do this. Therefore, he borrowed more money from Johann Fust, who became his business partner. The Gutenberg Bible cost over 2,000 guilders to produce, (a master printer would only make about 20-30 guilders per year), but by 1455 the Latin Bible was coming off the press. But Gutenberg was so far in debt, and his partner, Fust, who had contributed the money for the project, repossessed his press, his shop, and the printed Bibles. After 1457 there are no printed documents associated with Gutenberg’s name. 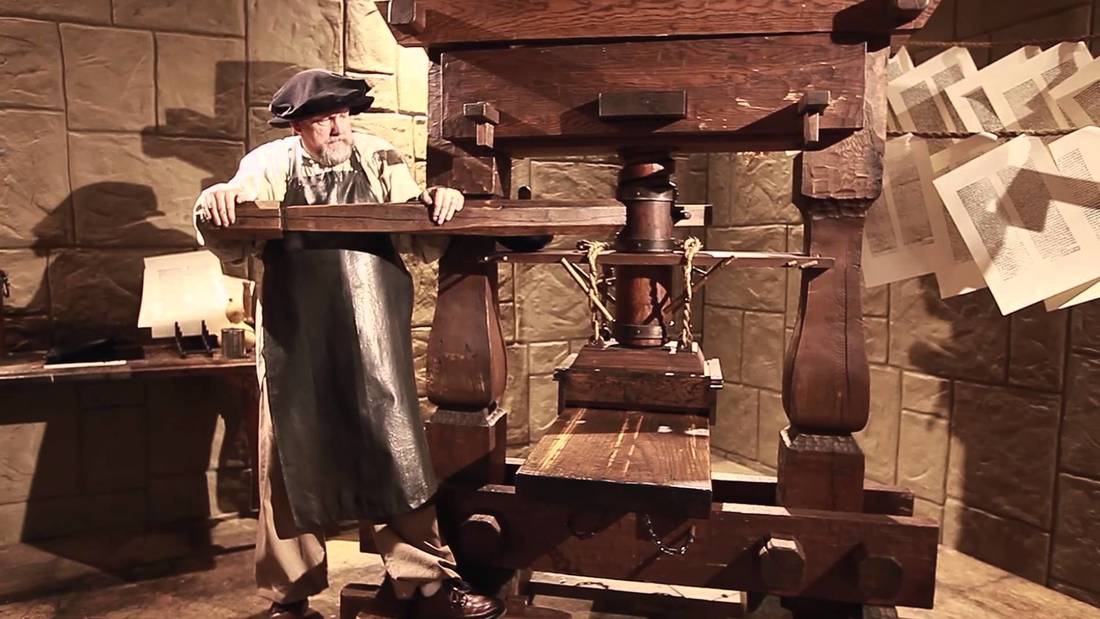 Replica of Gutenberg’s Printing press Display by Passages Exhibit- www.ExplorePassages.com
The idea of the printing press had been invented by the Chinese as early as the ninth century, but what made Gutenberg’s press unique was the invention and use of moveable type. This was the concept of individual letters placed in a particular order, allowing the printer to produce printed pages out of pre-formed block letters. Each letter was hand chiseled from wood, and then placed in the order determined by the editor to create a page. What seems so simple now, was revolutionary to the printing press. Now, instead of an entire page needing to be cut from wood, which is nearly impossible to do for a book of any length, the individual letters were carved, and then placed in the desired order. When that page was done, those same letters could be used to form the next page. After the page was pressed, an artist, or illuminator, hand drew the first letter of every chapter and decorated the headings of every page. Thus, this concept made it possible to produce a book, like the Bible, that would have over 1,000 pages. In fact, the Gutenberg Bible was hand bound in two volumes, there were 648 pages in the first, and 634 in the second.
​It was this invention of moveable type that transformed the use of books and promoted knowledge, specifically toward learning the Scriptures. The Gutenberg Bible was printed in Jerome’s Latin, and authorized by the Catholic Church since it was produced in their “divine” tongue”. However, the Reformation would not have been successful if it were not for the printing press, enabling the printed Word of God, and the printing of exegesis and commentaries explaining the Scriptures. The history of the Bible is a way for us to look back and see the hand of God moving to enlighten His Word to the world.
Next Chapter... Erasmus Greek New Testament