​he Waldensian movement started in Lyon, France, toward the end of the 12th century with Peter Waldo, and spread throughout Europe in the Middle Ages. Peter Waldo, 1140-1217, of whom the Waldensians are named, in 1170, was a very wealthy, well-known merchant in the city of Lyon. He had a wife, two daughters, and an abundance of property. But Waldo became deeply troubled over the spiritual state of his soul and he was desperate to know how he could be saved. Therefore, he resolved to read the Bible. But since it only existed in the Latin Vulgate, and his Latin was poor, he hired two scholars to translate it into the vernacular, so he could study it.
​            He also sought spiritual counsel from a priest, who pointed him to the rich young ruler in the Gospels and quoted Jesus: “One thing you still lack. Sell all that you have and distribute to the poor, and you will have treasure in heaven; and come, follow me” (Luke 18:22). Jesus’s words pierced Waldo’s heart. Like the rich young ruler, Waldo suddenly realized he had been serving Mammon, not God. But unlike the rich young ruler who walked away from Jesus, Waldo repented, and did exactly what Jesus said: From that point on, he determined to live in complete dependence on God for his provision. He sold his possessions, and devoted the remainder of his life to preaching the Gospel to the common people. 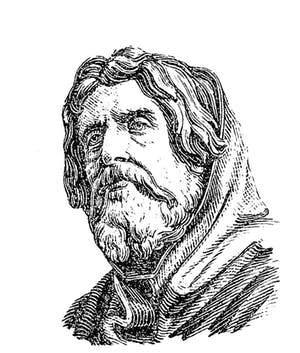 Peter Waldo, leader of the Waldensians
Waldo immediately began to preach from his Bible in the streets of Lyon, especially to the poor. Many were converted, and by 1175 a sizable group of men and women had become Waldo’s disciples. They too gave away their possessions and were preaching (women as well as men). The people started calling them the “Poor of Lyons.” Later, as the group grew into a movement and spread throughout France and other parts of Europe, they became known as “The Waldensians.”
The more Waldo studied Scripture, the more troubled he became over certain doctrines, practices, and governing structures of the Catholic Church — not to mention its wealth. And he boldly spoke out against these things.
The Waldesians were declared heretics by the Roman Catholic Church and in 1184, Pope Lucius III excommunicated the Waldensians, persecuting, and forcing this group underground. Nonetheless, they didn’t stop preaching. As the Waldesians proclaimed the Gospel, the Roman Catholic persecution grew in severity until, in the fifteenth century, the Waldesians had shrunk into small communities in the alpine valleys of France and Italy.[1]
However, in the sixteenth century, the Waldensians came back in force, and joined Reformers Oecolampadius, Martin Brucer, and William Farel, and followed the Swedish Reformer, Ulrich Zwingli. This group financed the translation of the entire Bible into French through the help of Robert Olivetan and John Calvin.
After the council of Chanforan in 1532, the Waldesians had officially joined the Reformation. They were the first group to take the Gospel into Italy, a dangerous venture against the Catholic Church. In doing so, the Waldensians suffered violent persecution, and many were burned at the stake.[2]