uther had hoped for a reform; however the Reformation took place far different than he imagined. He never expected to be the hero of this reform. He looked only to the Pope, the cardinals, the bishops, theologians, monks, and priests, not himself. He said, “that is the direction from which I expected the Spirit to come, through the Church.”
Luther engaged in battles with the defenders of indulgences, namely Tezel and his Dominicans, but the Spirit rose up inside him and, with the Word of Truth, was victorious in all his arguments. Indulgences, for the most part, became of no effect in Germany and Tezel, with his deceptive speeches and cons, left Germany a defeated man.
However, others took his place. A Dominican of Rome, Sylvester Mazolini, wrote a letter to Luther, dedicating it to Pope Leo X. He attacked the Theses of Luther, by ridicule, insult, and threats. Sylvester deemed Luther a heretic and said, “no man is entitled to understand Scripture in a sense differing from that of the Roman pontiff. Whoever rests not in the doctrine of the Roman Church, and the Roman pontiff, as the infallible rule of faith, from which the Holy Scripture itself derives its force and authority, is a heretic.”
None of these threats were able to move Luther. The Bible had produced the Reformer, and begun the Reformation. Luther, in believing, had no need of the testimony of the Church. His faith was derived from the Bible itself; from within, and not from without. His thorough conviction, that the evangelical doctrine was immovably founded on the Word of God, made him regard all external authority as useless.
Cries from Rome demand the death of this heretic. Sayings like, “It is high treason against the Church to let so deplorable a heretic live another single hour. Let a scaffold be instantly erected for him!” But none of the threats were able to touch the Reformer. The hand of God was on Luther, and he was surrounded by the protection of his friend, Elector Fredrick.
Others, such as a man from Rome named Dr. Eck, tried to persuade Luther to retract, but their lengthy debates proved unsuccessful against the hand of God and His plan of the Reformation. 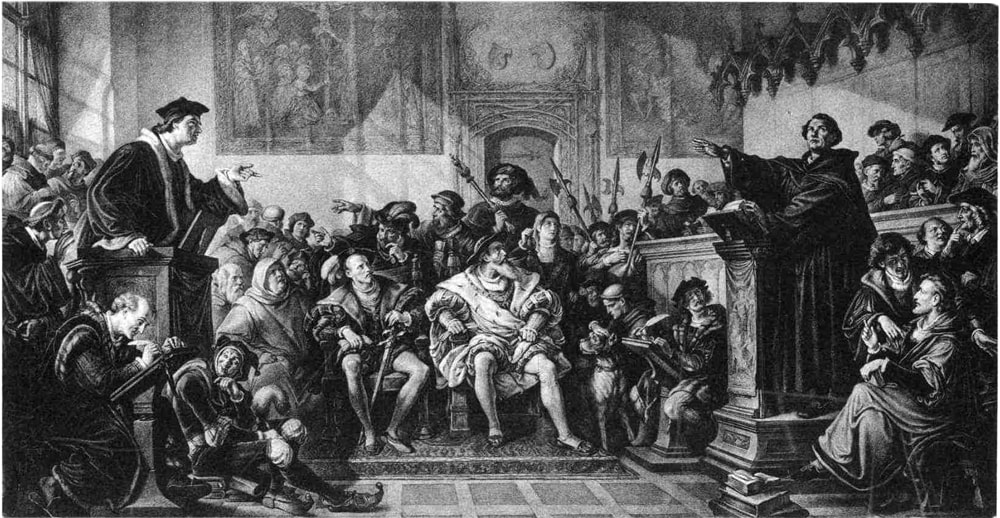 Luther debates Dr. Eck at the Leipzig Debate of 1519
Next Chapter...Martin Luther and Philip Melanchthon