John Foxe's Acts and Monuments of the Martyrs for Christ

​long with evidence of Biblical ancient manuscripts, proving the preserving of the Word, we also have record of the martyrs of this time, giving their life for the Gospel as recorded by John Foxe in his “Acts and Monuments”.
Below are a few examples: 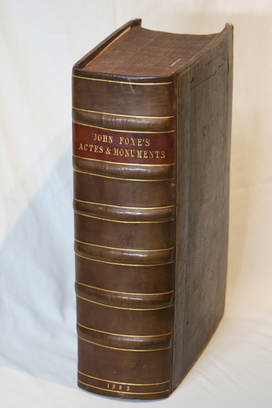 1583 Foxe's Acts and Monuments
Martin, bishop of Rome, was born at Todi, in Italy. He was naturally inclined to virtue, and his parents bestowed on him an admirable education. He opposed the heretics called Monothelites, who were patronized by the emperor Heraclius. Martin was condemned at Constantinople, where he was exposed in the most public places to the ridicule of the people, divested of all episcopal marks of distinction, and treated with the greatest scorn and severity. After lying some months in prison, Martin was sent to an island at some distance, and there cut to pieces, A.D. 655.
John, bishop of Bergamo, in Lombardy, was a learned man, and a good Christian. He did his utmost endeavors to clear the Church from the errors of Arianism, and joining in this holy work with John, bishop of Milan, he was very successful against the heretics, on which account he was assassinated on July 11, A.D. 683.
Boniface, archbishop of Mentz, and father of the German church, was an Englishman, and is, in ecclesiastical history, looked upon as one of the brightest ornaments of this nation. Originally his name was Winfred, or Winfrith, and he was born at Kirton, in Devonshire, then part of the West-Saxon kingdom. When he was about thirty years old, he received the holy order of priesthood. From which time he began to preach and labor for the salvation of his fellow creatures; he was released to attend a synod of bishops in the kingdom of West-Saxons. He afterwards, in 719, went to Rome, where Gregory II who then sat in Peter's chair, received him with great friendship, and finding him full of all virtues that compose the character of an apostolic missionary, dismissed him without commission at large to preach the Gospel to the pagans wherever he found them. Passing through Lombardy and Bavaria, he came to Thuringia, which country had before received the light of the Gospel, he next visited Utrecht, and then proceeded to Saxony, where he converted some thousands to Christianity.
In 753, he traveled to Friesland, where he converted and baptized several thousands of barbarous natives, demolished the temples, and raised churches on the ruins of those superstitious structures. A day being appointed for confirming a great number of new converts, he ordered them to assemble in a new open plain, near the river Bourde. Thither he repaired the day before; and, pitching a tent, determined to remain on the spot all night, in order to be ready early in the morning. Some pagans, who were his inveterate enemies, having intelligence of this, poured down upon him and the companions of his mission in the night, and killed him and fifty-two of his companions and attendants on June 5, A.D. 755. Thus, fell the great father of the Germanic Church, the honor of England, and the glory of the age in which he lived.
At the beginning of the second millennium, the persecution for the Word of God transitions away from the pagan world and now comes directly from the Roman Catholic Church. The Papal authority had continued to gain complete control of the Holy Roman Empire, gradually slipping away from the Truth and seeking power and wealth in its traditions. For the next 600 years, up through the reign of “Bloody Mary”, the papal chair will kill more Christians than the 1,000 years previous.
This domination of the Catholic Church, leading to the persecution of thousands of Christians, can be linked to one main agenda of the enemy, namely Satan; to destroy the Word of God. The Catholic Church had always discouraged the reading and interpretation of the Holy Scriptures to the common people and desired it to be left in the hands of the priests, but in 1229, at the Council of Toulhouse, it was made officially illegal for the common people to read, translate, and own a Bible. “We prohibit also that the laity should be permitted to have the books of the Old or New Testament; but we most strictly forbid their having any translation of these books.” The penalty of disobeying this decree was death. This ushered in the Inquisition. Below is John Foxe’s summary of the Inquisition:

Foxe's Summary of the Inquisition 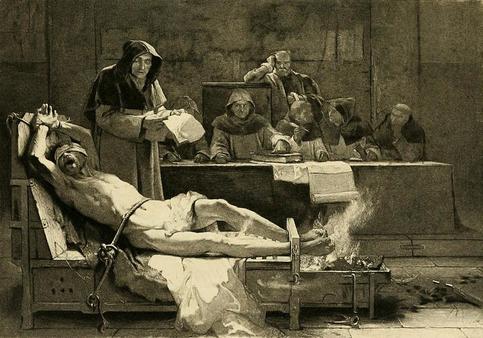 The Cruelties of the Inquisition
​            Of the multitudes who perished by the Inquisition throughout the world, no authentic record is now discoverable. But wherever popery had power, there was the tribunal. It had been planted even in the east, and the Portuguese Inquisition of Goa was, until within these few years, fed with many an agony. South America was partitioned into provinces of the Inquisition; and with a ghastly mimickry of the crimes of the mother state, the arrivals of viceroys, and the other popular celebrations were thought imperfect without an auto da fe. The Netherlands were one scene of slaughter from the time of the decree which planted the Inquisition among them. In Spain the calculation is more attainable. Each of the seventeen tribunals during a long period burned annually, on an average, ten miserable beings! We are to recollect that this number was in a country where persecution had for ages abolished all religious differences, and where the difficulty was not to find the stake, but the offering. Yet, even in Spain, thus gleaned of all heresy, the Inquisition could still swell its lists of murders to thirty–two thousand! The numbers burned in effigy, or condemned to penance, punishments generally equivalent to exile, confiscation, and taint of blood, to all ruin but the mere loss of worthless life, amounted to three hundred and nine thousand. But the crowds who perished in dungeons of torture, of confinement, and of broken hearts, the millions of dependent lives made utterly helpless, or hurried to the grave by the death of the victims, are beyond all register; or recorded only before HIM, who has sworn that “He that leadeth into captivity, shall go into captivity: he that killeth with the sword must be killed with the sword.”
Such was the Inquisition, declared by the Spirit of God to be at once the offspring and the image of the popedom. To feel the force of the parentage, we must look to the time. In the thirteenth century, the popedom was at the summit of mortal dominion; it was independent of all kingdoms; it ruled with a rank of influence never before or since possessed by a human scepter; it was the acknowledged sovereign of body and soul; to all earthly intents its power was immeasurable for good or evil. It might have spread literature, peace, freedom, and Christianity to the ends of Europe, or the world. But its nature was hostile; its fuller triumph only disclosed its fuller evil; and, to the shame of human reason, and the terror and suffering of human virtue, Rome, in the hour of its consummate grandeur, teemed with the monstrous and horrid birth of the INQUISITION![1]