​s the centuries progressed, the Catholic Church became increasingly corrupt, seeking power and money by means of the papal see and the help of the Roman Emperor. The western half of the Roman Empire fell in 476AD to Germanic barbarians and Atilla the Hun. The eastern half, known as the Byzantine Empire, still existed for another millennium. The fall of Rome ushered in the “Dark Ages”, mainly due to one primary reason, the absence of the Holy Scriptures. 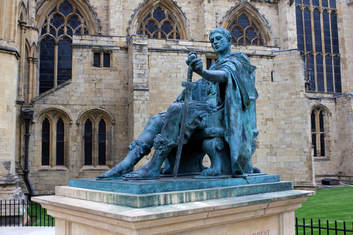 Emperor Constantine
The Council of Nicene, in 325AD, led by Emperor Constantine, unified the church under one belief system, to unite Christians by one doctrine, the doctrine of Jesus Christ, the Son of the Living God, and resolve the disagreements arising from the deceptive tactics of the Gnostics of Alexandria. The Council of Nicene produced positive results, however this was the beginning of the Catholic Church, which, at this time, a Universal Church was, and still is, the goal of the Christian; unified as one body under Christ as the head, (Eph 4:1-16). But, sadly, this unity did not remain. After the Council of Hippo in 393 and 4 years later in 397, at the Council of Cartage, the 27 books of the New Testament were agreed upon, namely to combat the false gospels of the Gnostics, but they also made the mistake of discouraging the common people from reading the Bible on their own. When the city of Rome fell in 476, the Roman Empire lost its control, however the Roman Catholic Church did not succumb to annihilation, rather, it thrived. Now with the Roman Empire out of the way, and the uncivil government of the Barbarians, the Roman Catholic Church stepped in and took control of both civil and spiritual authority. If the Church had been led of the Spirit, and guided by the Word of God, the enlightenment of the Gospel could have shown through to all the world. Instead, the Roman Catholic Church seized this opportunity for the selfish gain of money and power, and forbid the Holy Scriptures to be read. Thus, the Dark Ages commenced.
Next Chapter...The Holy Roman Empire