William Tyndale
​The Arrest and Martyrdom of Tyndale

​​yndale, still residing in the house of Poyntz, had begun to feel more at ease and had regular dinners with English merchants. Among these acquaintances was a man named Henry Phillips. Phillips had befriended Tyndale through his discussions of learning. Tyndale, after getting to know Phillips, invited him to his lodgings in Antwerp at the house of Poyntz. Tyndale showed him his books and studies and discussed his furtherance of the translation of the remainder of the Old Testament. Unbeknownst to Tyndale, Henry Phillips was secretly working for the Romish party in their pursuit and arrest of Tyndale. The Romish authority had placed a bounty on the head of Tyndale, and Phillips, who had squandered his inheritance on gambling, was in desperate need and agreed to the betrayal of Tyndale.  After being invited to Tyndale’s house, Phillips arranged for officers to capture and arrest Tyndale. On May 24th, 1535, Tyndale was arrested, without the knowledge of Henry VIII, and taken to the castle of Vivoorde, near Brussels. He remained in prison for a year and a half.
In 1534, the Merchant Adventurers commissioned John Rogers to be chaplain of the English factory at Antwerp. At this time Rogers met William Tyndale and by the governing hand of God, became good friends. At the time of Tyndale’s arrest, it is suggested that Rogers was in possession of Tyndale’s latest manuscripts of the Old Testament which included Joshua thru 2Chronicles. By this divine intervention, Tyndale’s manuscripts were not destroyed. Rogers, in 1537 would continue Tyndale’s dream of publishing the entire Bible in the English language. This Bible is known as the Mathew’s Bible.
During his imprisonment, it is possible that Tyndale continued his work on the Old Testament, and the manuscripts given to Rogers, although I feel this is very unlikely considering the hatred the Romish party had toward Tyndale. Although what leads us to believe this as a possibility is a letter from Tyndale, reminding us of the words the Apostle Paul had for Timothy. Tyndale’s letter read:
Tyndale was condemned to death on August 10th, 1536. On the 6th of October 1536,
Tyndale was led to the place of execution. He was first chained to the stake,
strangled and then his body burnt. Just before his death he cried out,
“Lord open the king of England’s eyes. 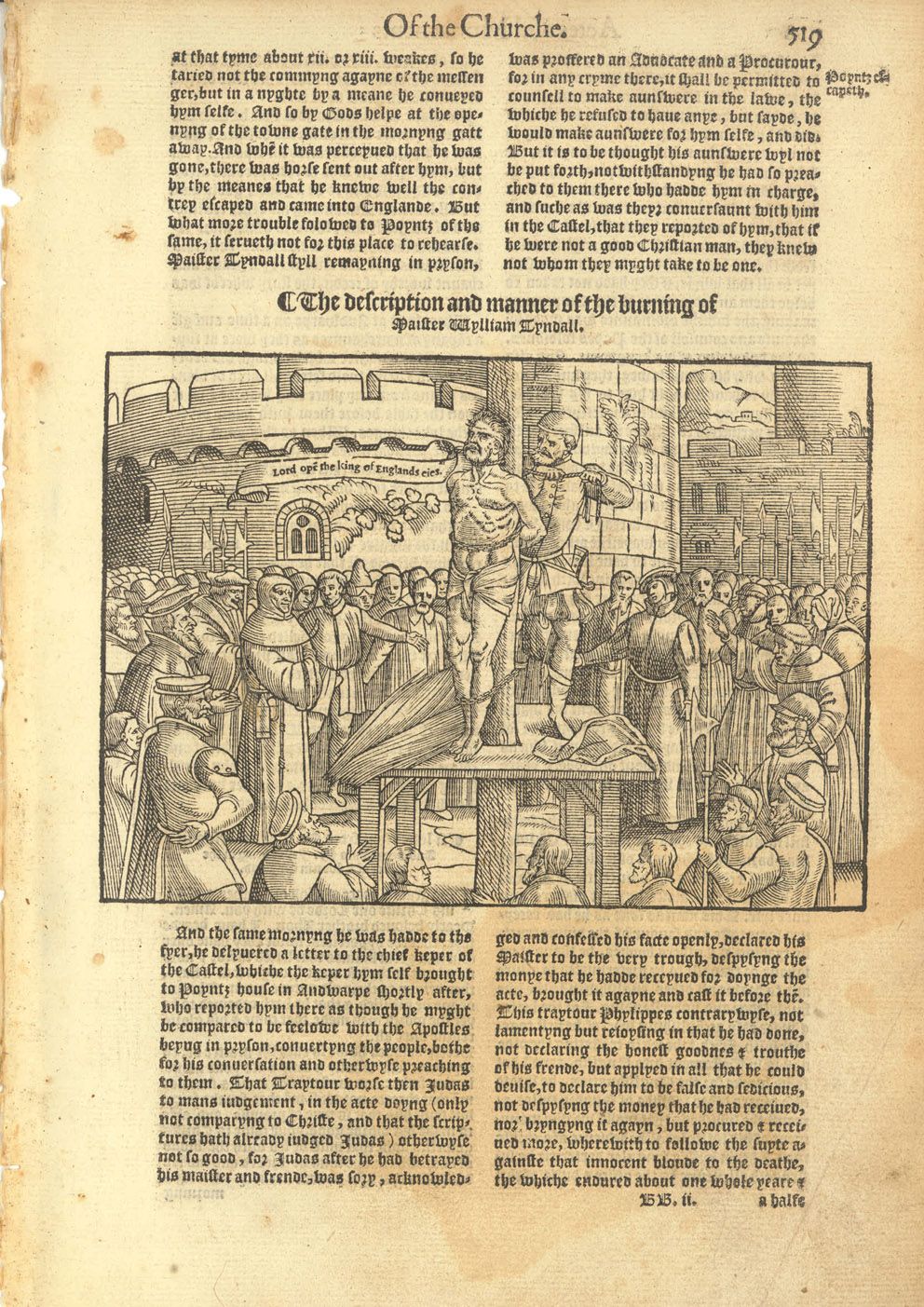 1563 Foxe's Book of Martyrs- Tyndale's Martyrdom
Next Chapter...Ulrich Zwingli and the 1531 Zurich Bible