​n the time of the Middle Ages, known as the Dark Ages, lasting from 476 to the 15th century, the Roman Catholic Church ruled relentlessly. But it was the rise of the Holy Roman Empire, beginning with Pope Charlemagne in 800AD, uniting the church and state. The Catholic Church had taken her control of the west. With the absence of a proficient civil government, namely Rome as the head, she became the great power of temporal and spiritual matters. Up until 476, the Catholic Church took a side seat to the throne of Rome, but in the year 800, the roles became reversed, and now the Catholic Church would have control over the chair of the Emperor. Resulting in a perpetual increase of wealth and power which brought in the time of the Great Schism (the separation of the Roman Church in the west from the Greek Byzantine Church in the east), the Inquisition (a judicial inquiry for heresy against the Catholic Church), and the Crusades (a series of holy wars against the Muslims, Jews, and non-Christians). 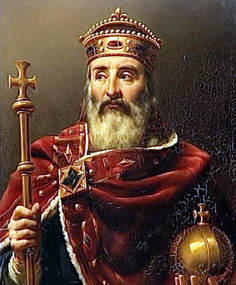 Charlemagne 800AD
Charlemagne, a medieval emperor who ruled most of Western Europe from 746-814, became the leader of the Franks in 771. He made it his objective to unite the Germanic tribes into one kingdom and convert his subjects to Christianity, this had good intentions but poorly executed. In 800, Pope Leo III crowned Charlemagne emperor of the Romans, thus beginning the dominion of the Holy Roman Empire. Many people mark this as a reunion of the Christian society, but that is from the world’s perspective. The world confuses the dominance of the Holy Roman Empire, and the unification of Christians. Forcing people to convert to Christianity through warfare is not a unification of Christendom. The name Christian is not a title that someone has, but it is what one becomes by having faith in the Savior, the Lord Jesus Christ; who came to take away the sins of the world, and to everyone who believes, give life everlasting, full of eternal happiness and joy, (Jn 3:16, Eph 2:8, Rom 10:9-10, Ps 16:11).
It was from this point, the Roman Catholic Church used its power to control the west. Over the course of the next seven hundred years, the Holy Roman Empire progressively became more evil and corrupt. Using their wealth and power to dominate and rule the kingdom, sadly in the name of Jesus Christ. The Roman Catholic Church began to enforce their statutes with bloodshed, along with suppressing the Word of Truth even among themselves. No more was the Word a light unto their path, but rather a cloak in which they could mask their hidden agendas and traditions to gain power and wealth. The Popes used the see of Rome, acting as the Vicar of Jesus Christ, pronouncing himself infallible. This set the pope on a pedestal in which no man should be placed, thus, leading to a path of corruption.
Next Chapter...The Thread of the Truth Remains