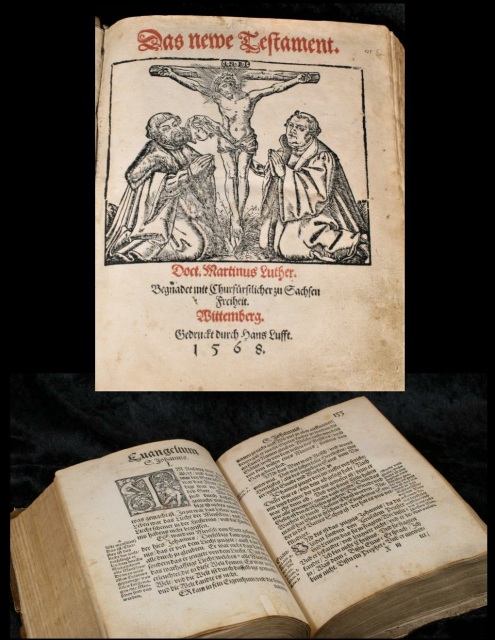 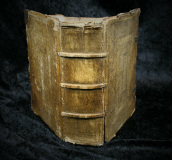 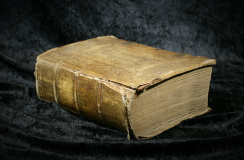 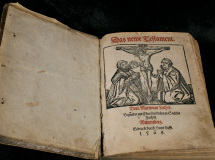 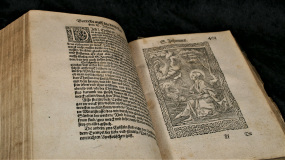 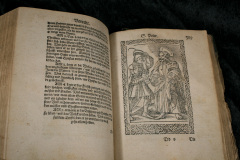 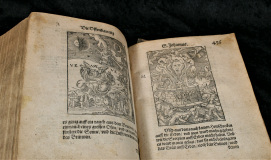 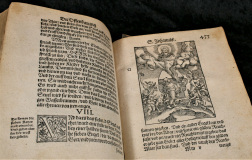 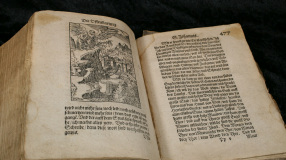 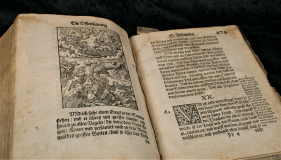 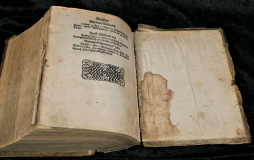 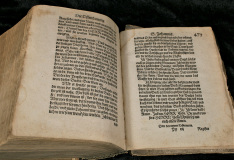 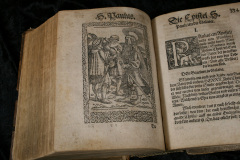 Good condition...Original binding with embossed decoration...binding hinges slightly cracked but intact and secure....pages bright and clean...vellum cover is loose on edges on some edges...hasps missing

Luther, amidst the walls of the Wartburg, spent whole days absorbed in meditation. And after several months, Luther wrote secret letters back to his friends at Wittemberg, namely to Melanchthon and Spalatin. He informed them of his capture and plan of the Elector to keep him safe behind the walls of the Wartburg. It was here in the castle that Luther would release the power of the Reformation, the translation of the New Testament in the common tongue of the Germans.

Up until this moment, the Word of God was hid from the world, only available in the original languages to the scholars of the age. Erasmus had laid the foundation for Luther to release the Word of Truth to the world. Just as John was stationed on the island of Patmos to write the Revelation, so was Luther in the Wartburg to translate the New Testament. Satan had come against the Reformer and through the power of the papacy tried to destroy the Reformation, but this action against Luther was the necessary means by which the New Testament was to be translated. Luther could never had performed such a massive work if he had been among the distractions of Wittemberg, but in the confinement of the Wartburg, he was able to substantially complete this wonderful work in less than a year. He only needed his dear friend Melanchthon to edit the document. Thus, the ultimate example of Romans 8:28.

On March 3rd, 1522, Luther quit the Wartburg forever, hence, returning to Wittemberg. Luther brought with him the hand-written translation of the New Testament on his five-day journey to Wittemberg. When he arrived home at Wittemberg, he connected with his dear friend Melanchthon and asked him to help publish the New Testament. Overjoyed with this request, they both worked tirelessly, and with fervent zeal to carry this important work onto the printed page. Three presses were employed in Wittemberg, Germany, printing 10,000 sheets daily. And finally, on the 21st of September 1522, 3,000 copies of the New Testament appeared in a two-volume folio, measuring 9” wide x 101/2” tall.